Pete worked as an optometric technician for many years, and now runs his own gardening business. A keen outdoorsman and respected figure in the New Zealand bush regeneration community, Pete recognised the importance of biologist Jeremy Griffith’s explanation of the human condition in 1992, after reading Jeremy’s second book, Beyond The Human Condition. Pete was drawn to the honesty and undeniable truths in Jeremy’s writing and so when WTM Centres began opening around the world, Pete was inspired to establish a WTM Centre in New Zealand.

Download this transcript as an A4 or US Letter PDF

Hi, my name is Pete Sadler and I’m very excited to be opening a new centre for the World Transformation Movement in New Zealand. I’ve been a WTM member for many years having first heard about Jeremy and his work in 1992 when Jeremy came to New Zealand for the launch of his earlier book Beyond The Human Condition. I read an article in the New Zealand Herald and thought, ‘I’ve gotta read this book’, so I went to the local book shop and ordered a copy. I was extremely excited when it arrived and set about reading it. Once I started reading I just couldn’t put it down, it all rang so true to me. I also had the great pleasure of meeting Jeremy when he came to Auckland in 1995, and my wife Mary and I took Jeremy for a bit of a tour around some of New Zealand’s more natural sights. I have a folder given to me at that time by another WTM supporter from New Zealand (who is actually a former All Black rugby player) that is packed full of information on Jeremy’s early life and thinking and I have treasured it ever since. When I read FREEDOM, although I expected, having read many of Jeremy’s previous books, to be presented with lots of honesty and understanding, I was completely blown away by the undeniable truths Jeremy has given us all. It absolutely fills me with overwhelming hope for us and everything that lives on this awesome planet. I cannot express strongly enough how extremely grateful I am to Jeremy and all at the WTM. I strongly urge everyone to visit the WTM website at www.humancondition.com and learn more about these amazing insights, or you can contact me at www.wtmnewzealand.com.

Fellow New Zealander and co-founder of the New Zealand Centre, Dr Anna Fitzgerald, has also come to love and treasure these incredible insights into the meaning and purpose of human existence.

Anna came across Jeremy Griffith’s explanation of the human condition while completing her doctoral degree in biological sciences at the University of Auckland, eventually moving to Australia in 2006 to help promote these critically important understandings. Anna has worked in both commercial and government funded biotechnology companies in Australia and New Zealand. She has led the development of numerous large-scale genome collaborations, including managing the Australian Government’s investment in biomolecular science infrastructure, and has worked in R & D for the biomedical and horticultural industries.

You can see in the following testimonial how the explanation of the human condition has given Anna a framework through which she is now able to understand every aspect of our lives. In particular, it has allowed her to understand the differences between men and women, bringing about, as she says, “the true liberation of women and the reconciliation of the sexes”.

Download this transcript as an A4 or US Letter PDF

I came across these explanations 15 years ago whilst I was in the middle of finishing my PhD in biological sciences in New Zealand—I’m now a Science Program Strategist, I coordinate large government-funded molecular science collaborations in Australia.

When I heard this explanation of our human behaviour all those years ago, its power to explain the world was just SO totally accountable, it captivated me—so I moved to Australia to help promote these critically important understandings.

As a woman, this explanation was both very arresting and confronting, because it’s fearlessly honest about humans’ contradictory nature. It makes sense of what it means to be a woman—our nurturing instincts and compassion, as well as our neuroses and vanity and emotionality—it goes so far as to make sense of why we have developed our feminist streak, to counter the baffling and oppressive egocentricity of men. But what’s really astonishing is that we can now understand why this egocentricity in men was actually necessary.

Until we could explain the human condition we couldn’t acknowledge the differences between men and women because it only led to prejudices, so all we could ask for, or in fact even demand, was equality. But because Griffith’s work establishes the equal worth or goodness of all humans we can now understand the different roles that men and women have traditionally played in the human journey and this is actually the unlocking point, this is what brings about deep empathy for each other, it heals the divide. As a scientist, I find the evolutionary biology underpinning the explanation of these roles absolutely fascinating.

There’s a powerful quote about women’s plight in Griffith’s book FREEDOM (see par. 798) from the South African writer Olive Schreiner and this encapsulates every woman’s hope and that is ‘to be born a woman’ ‘in the future’ is ‘not to be born branded’, but to be valued, loved for their real self—and that’s essentially what can happen now that the human condition has been explained. This explanation brings about the true liberation of women and the reconciliation of the sexes, which is truly extraordinary.

I really implore everyone, especially women to look into this because to be able to understand why men and women have behaved the way they have behaved was nothing short of life-changing for me.

Alongside the original WTM Centre in Sydney, Australia, World Transformation Movement Centres are being established around the world to help bring to everyone the now desperately needed all-relieving and all-explaining biological understanding of the underlying issue in all of human life of our troubled human condition.

Visit the WTM’s Transformation page to learn more about the formation of these Centres. You can access the following examples of WTM Centre websites by clicking on their images below. 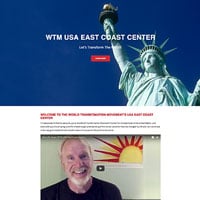